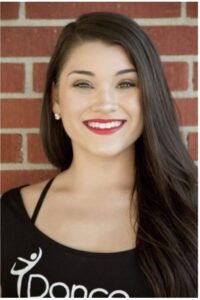 KAYLA MARTIN began dancing at Meg Segreto’s Dance Centre at a young age, advancing through her dance studies in Ballet, Pointe, Jazz, Tap, Modern, Lyrical and Acro to then become a well-rounded member of the Perpetual Motion Dance Company. Under the training of Meg Segreto and the phenomenal MSDC staff, Kayla earned multiple lead roles in the yearly production of The Nutcracker, was awarded High Score as a competitor at Florida Dance Masters and received the Teachers Award as well as the honorary June Taylor Scholarship Award before graduating from PMDC as a Senior Company Member.

After years of Assistant Teaching her favorite instructors, attending Florida Dance Master Conventions and dedicating many hours to rehearsals and time at the studio, Kayla decided that wherever life led her – dance would always be an active part of it. During her time at Florida State University, her dance training continued with classes and performances within the Dance Department at FSU and a role as Dance Captain for the production of the Tango Opera “Maria De Buenos Aires”. Additionally, Kayla performed throughout Tallahassee as a resident of the Dance Tallahassee Dance Company for three consecutive years, led master dance classes and fell in love with Barre and Pilates as exercise. After earning her Bachelor’s Degree in English and Communications in 2017, she then received her Barre and Pilates certifications and continues to teach both methodologies alongside her work as a Dance Instructor. She prides herself in pairing her knowledge of safe movement practice with dance and is so elated to be back teaching at Meg Segreto’s to help build a healthy and strong dance foundation for each student!

We use cookies on our website to give you the most relevant experience by remembering your preferences and repeat visits. By clicking “Accept All”, you consent to the use of ALL the cookies. However, you may visit "Cookie Settings" to provide a controlled consent.
Cookie SettingsAccept All
Manage consent

This website uses cookies to improve your experience while you navigate through the website. Out of these, the cookies that are categorized as necessary are stored on your browser as they are essential for the working of basic functionalities of the website. We also use third-party cookies that help us analyze and understand how you use this website. These cookies will be stored in your browser only with your consent. You also have the option to opt-out of these cookies. But opting out of some of these cookies may affect your browsing experience.
Necessary Always Enabled
Necessary cookies are absolutely essential for the website to function properly. This category only includes cookies that ensures basic functionalities and security features of the website. These cookies do not store any personal information.
Non-necessary
Any cookies that may not be particularly necessary for the website to function and is used specifically to collect user personal data via analytics, ads, other embedded contents are termed as non-necessary cookies. It is mandatory to procure user consent prior to running these cookies on your website.
SAVE & ACCEPT