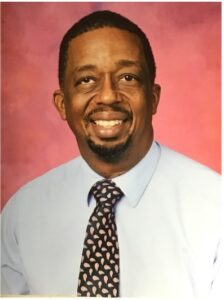 EDWIN HOLLAND, along with his wife Gaile, owned and operated the Edwin Holland School of Dance from 1985 to 2007. Having started dancing at the age of 8, Edwin received the bulk of his training from Judi Nelson and studied with Ronn Daniels, and the legendary Steve Condos. “Mr. Ed”, as he is known to his students, has taught tap at several schools and dance studios in Florida and has also taught as an adjunct professor at Barry University’s Performing Arts Dance Program.

Edwin has been a guest teacher and performer throughout the state of Florida and in 2005 was a featured performer in a Cotton Club Revue that toured in Barcelona and Madrid, Spain. Many of his former students are performing or teaching professionally– including his 2 daughters Courtney and Christine as well as his son Curtis who, in 2013, was one of the 20 finalists on the television show, “So You Think You Can Dance”. Edwin’s style of tap is a combination of highly animated tap moves for the visual aspect of dance as well as the “close-to-the-floor” percussive rhythms to stay true to traditional origins of tap. Edwin describes himself as extremely passionate about tap and its history and is dedicated to passing on the rich tradition of tap to others.

We use cookies on our website to give you the most relevant experience by remembering your preferences and repeat visits. By clicking “Accept All”, you consent to the use of ALL the cookies. However, you may visit "Cookie Settings" to provide a controlled consent.
Cookie SettingsAccept All
Manage consent

This website uses cookies to improve your experience while you navigate through the website. Out of these, the cookies that are categorized as necessary are stored on your browser as they are essential for the working of basic functionalities of the website. We also use third-party cookies that help us analyze and understand how you use this website. These cookies will be stored in your browser only with your consent. You also have the option to opt-out of these cookies. But opting out of some of these cookies may affect your browsing experience.
Necessary Always Enabled
Necessary cookies are absolutely essential for the website to function properly. This category only includes cookies that ensures basic functionalities and security features of the website. These cookies do not store any personal information.
Non-necessary
Any cookies that may not be particularly necessary for the website to function and is used specifically to collect user personal data via analytics, ads, other embedded contents are termed as non-necessary cookies. It is mandatory to procure user consent prior to running these cookies on your website.
SAVE & ACCEPT